+91-03326312437
dbbandel78@gmail.com
THE SCHOOL OFFICE WILL REMAIN CLOSED ON LOCKDOWN DAYS. ICSE & ISC DOCUMENTS WILL BE AVAILABLE ON OTHER DAYS ********* NOTICE ON OFFLINE PAYMENT/ATTESTATION, DOCUMENTS- SEE NOTICE BOARD. 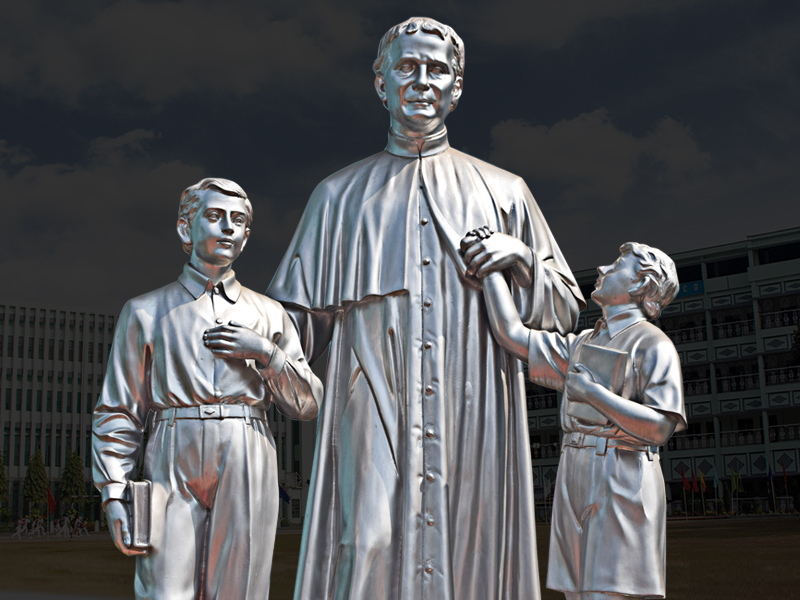 John Bosco, the father and friend of youth was born on August 16, 1815, in a peasant family in the little hamlet of Becchi, some 20 kilometers from Turin, Italy. When John was only 2 years old, his Father Francis Bosco passed away. His grief stricken mother, Margaret Occiena Bosco, had a harrowing time to bring him up.
At the age of nine, John had a mysterious dream which led him to his future mission. He decided to become a priest and commit his life to the welfare of young people.
To complete his education John had to do his share of work in the family farm and study during his spare time. Working as a servant, teaching, assisting a tailor, doing chores for a blacksmith and keeping score at a billiard table were some of the things he did in order to pay for his food, lodging and tuition while at school. In due course, John entered the seminary and was ordained a priest on June 5, 1841. From then on he was known as Don Bosco (Father Bosco).
Very soon Don Bosco became a frequent visitor to the poorer quarters of the city. This young priest was distressed by the swarms of neglected children whom he encountered. In the miserable garrets and cellars which he visited, he found exemplified all the evils of overcrowding, all the terrible effects of herding the young and innocent with those already corrupt. In the prisons he met youth serving terms for every type of crime, while during his evening walks he constantly met bands of young people fighting, making themselves a danger to the society. He decided that the work of his life would be to redeem these miserable youths.
Don Bosco’s work for boys started with one boy, a mason’s apprentice. Soon this boy brought others and the number of “Don Bosco’s friends” multiplied. He gave them facilities for games and taught them their religion.
In 1853, two small workshops had been opened, one a shoemakers’, the other a tailor’s for teaching the unemployed youngsters a trade in order to provide them with the means of earning an honest livelihood. A workshop for teaching carpentry was soon followed by others for book-binding and cabinet making.
All this while from his ‘old boys’, Don Bosco had been building up a ‘society of men’ who would help him to develop his work and would carry it on when he died. In December 1859 these young were formed into a simple society for this purpose. In May 1862 they took the vows of poverty, chastity and obedience – thus forming a true religious congregation. In 1869 this community of men was officially recognized by the Catholic Church and took the name “Salesians” after St. Francis de Sales.
Don Bosco called his methods of education the ‘Preventive System’ based on REASON, RELIGION and KINDNESS. He told his disciples that education was to be based on love, on selfless service for the mental, emotional, moral and spiritual growth of the pupils.
Don Bosco also founded a congregation of religious nuns known as the “Daughters of Mary Help of Christians” to educate girls with the same method as the Salesian used to educate the boys.
Today, a hundred and twenty years after Don Bosco’s death, 36000 Priests, Brothers and Sisters carry out his work in 134 countries around the world. They are engaged in a wide variety of developmental works directed to the welfare of the young academic, agricultural and technical school, youth centers, hostels and parishes, catechetics, mass media and social communications, youth counseling and rehabilitation centers and a host of special services for the delinquents and the marginalised youth.
Don Bosco died on January 31, 1888 at the age of seventy three. He was declared a saint on April 1, 1934. His feast day is celebrated on January 31 every year.